Fighting for Rights and Equality...

The Asian American Legal Foundation owes its existence to generations of Asian Americans, particularly in California’s century-and-a-half old Chinese-American community, who struggled to obtain the equal protection of the laws promised to all persons by the Fourteenth Amendment to the United States Constitution.  Throughout their history in this country, individuals of Chinese descent sought to participate in and contribute to American society but often faced significant barriers solely because of their race. See, e.g., Charles McClain, In Search of Equality (Univ. of Cal. Press 1994); Elmer Clarence Sandmeyer, The Anti-Chinese Movement in California (Univ. of Ill. Press 1991); Victor Low, The Unimpressible Race (East/West Publishing Co. 1982). 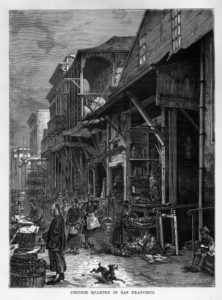 Time and again, Chinese Americans received equal treatment only after appealing to the federal courts for the protections guaranteed individuals by the United States Constitution.The long battle over basic rights, jobs, schools and other opportunities produced many of the pivotal court decisions that eventually gave rise to modern equal protection jurisprudence.

The role of Asian Americans in shaping civil rights jurisprudence has not gone unnoticed.  In Lee v. Johnson, 404 U.S. 1215 (1971), Supreme Court Justice Douglas wrote that California’s “establishment of separate schools for children of Chinese ancestry . . . was the classic case of de jure segregation involved [and struck down] in Brown v. Board of Education, 347 U.S. 483 [1954]. . . .” Id. at 1216. As Justice Douglas declared, “Brown v. Board of Education was not written for blacks alone. It rests on the Equal Protection Clause of the Fourteenth Amendment, one of the first beneficiaries of which were the Chinese people of San Francisco.”  404 U.S. at 1216.

It is a proud legacy.  And the lessons learned are still relevant today.  In case after case, the single historical truth that emerges is that the rights of people of Asian American descent—and of all Americans—have been vindicated only by strict application of the Fourteenth Amendment’s protection of individual rights.

The Asian American Legal Foundation is dedicated to the mission of carrying the torch forward.

. . . No State shall make or enforce any law which shall abridge the privileges or immunities of citizens of the United States; nor shall any State deprive any person of life, liberty, or property, without due process of law; nor deny to any person within its jurisdiction the equal protection of the laws. . . .

The State shall not discriminate against, or grant preferential treatment to, any individual or group on the basis of race, sex, color, ethnicity, or national origin in the operation of public employment, public education, or public contracting.

In Plessy v. Ferguson, 163 U.S. 537 (1896), the Supreme Court created the “separate-but-equal” doctrine in a case where a black passenger was barred from using a “white” railway car. In Wong Him v. Callahan, 119 F. 381 (C.C.N.D. Cal. 1902), this doctrine was applied to schools, when a district court found that Chinese American children in San Francisco were barred from “white” schools because the “Chinese” school in Chinatown was “separate but equal.” In Gong Lum v. Rice, 275 U.S. 78 (1927), a case involving a Chinese American girl in Mississippi, the Supreme Court affirmed that the separate-but-equal doctrine applied to schools. This pernicious doctrine of segregation endured until 1954, when it was finally struck down by the Supreme Court in Brown v. Board of Education of Topeka, 347 U.S. 483.

Recognizing the role of Asian Americans in this history, in Lee v. Johnson, 404 U.S. 1215, 1215-16 (1971), Supreme Court Justice William Douglas wrote that: “Historically, California statutorily provided for the establishment of separate schools for children of Chinese ancestry. That was the classic case of de jure segregation involved in Brown v. Board of Education. . . .  [It] was not written for blacks alone. It rests on the Equal Protection Clause of the Fourteenth Amendment, one of the first beneficiaries of which were the Chinese people of San Francisco.”

Your tax-deductible donation will aid in the fight for equal rights.